Hatyaiwittayalai School
University of the Thai Chamber of Commerce

Thassapak Hsu (ธรรศภาคย์ ชี; 徐志賢; born October 30, 1991), also known as Bie (บี้), is a Thai-Taiwanese actor, model, singer and host. He is best known for his portrayal of "My Girlfriend is an Alien".

Thassapak Hsu was born on October 30, 1991 as Xu Zhi Xian in Taipei, Taiwan to a Thai mother and a father of Taiwanese descent. When he was 14, he moved from Taiwan to Thailand, where he debuted as a singer at the age of 18.

Hsu graduated from Hatyaiwittayalai School and later studied at the University of the Thai Chamber of Commerce.

In 2013, Hsu debuted as part of the South Korean boy group VICTOR under the stage name Bie. The group debuted with the digital single "V-Up".

Hsu made his acting debut in the 2014 television drama Club Friday 5. In the drama, he portrays Win, a young man who starts a relationship with a man he named Boss (Witwisit Hiranyawongkul) after meeting him online. He then appeared in various Chinese and Thai dramas, including Cinderella Chef (2018), Love Won't Wait (2018), and My Girlfriend is an Alien (2019).

In 2012, Hsu started dating Thai actress and model Gubgib Sumonthip Leuanguthai. On January 23, 2016, the couple got married. Even before their wedding, they had already planned on having a child that year. Their first daughter, Paulina "Paopao" Hsu, was born on June 23, 2016, while their second daughter, Lalina Hsu, was born on May 7, 2020.

Hsu is of Protestant faith. He is fluent in Thai, Mandarin Chinese, Korean, and English. 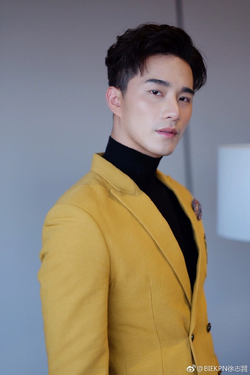