Blue Birthday (블루버스데이) is an South Korean web series produced by Naver subsidiary PlayList Studio. It premiered on July 23 through Naver TV and WeTV and aired every Friday and Saturday at 19:00 (KST). It premiered on August 6 through YouTube for international audiences.

Oh Ha Rin (Yeri) revisits the past through mysterious photos left by her first love, Ji Seo Jun (Yang Hong Seok), who died on her birthday 10 years ago. She had resolved to confess to him on her birthday, but he ended up taking his own life, much to her shock and horror. Seo Jun was also about to confess his feelings to Ha Rin when he met his sudden death in the photography room.

Ha Rin currently works at an abandoned pet shelter, but on the 10th anniversary of the incident, she comes into possession of some photos that Seo Jun left behind. Ha Rin, whose painful memories were relighted again, decides to burn all the pictures. When she was burning the pictures, she suddenly realized she was back to the day she took the picture 10 years ago. The camera only has 8 pictures, so Ha Rin only has 8 chances to go back in time

Will Harin finally uncover all the hidden secrets from the past and be able to change what had already happened?

Lost her first love 10 years ago and is currently working at an abandoned animal protection center. On the day of her 18th birthday she decided to confess her feelings to Seo Jun, but she finds him dead in the photo studio. Due to that, her life drastically changed, and endured times of great despair and hell.

Ha Rin's first love and the perfect example of a 'boyfriend'. He doesn't miss out on 1st place, the image of him being perfectly cheerful and kind, as with his good relationship with his schoolmates. He's able to fully show off his heart-throb charms, sometimes with a bright smile, sometimes with caring eyes, and sometimes with his energetic side. But, contrary to his bright appearance, he is a person that is gloomy inside and hides a lot of pain, but that does not open up to others about it. Ha Rin is the best friend who gave him hope for life. The day Ha Rin felt more than a friend to him, and tried to confess, he died in the photo studio where they had made happy memories together.

A reporter from the social affairs department, who had a crush on Ha Rin in the past. He was born into a wealthy family and always has a positive mind.

Harin's best friend and roommate. She is a loving and kind person who cares about Ha Rin after Seojun's death.

Soojin's boyfriend, who does everything for her.

Seojun's older sister. She runs a cafe and takes care of her younger brother and her parents, who are struggling after the sudden death of her brother.

A student who hated Ji Seo Jun. 10 years later, he works as a chemical medicine delivery agent to steal zoletil.

The series was produced by Playlist, a production company known for producing several hit web drama for the 10s-20s generation, including the A-Teen, A-Teen 2 and Love Playlist series. Directed by Park Dan-hee and written by Goo So-yeon and Moon Won-young, it is a work that challenged new genres and materials by reuniting with the production team, who had gathered topics with ending series such as The Best Ending (2019) and Ending Again (2020).

Principal photography on the series wrapped in June 2021 after 3 months of filming. On June 23, the stills from filming of the series were released.

On March 30, 2021, Joy News24 announced that Kim Yerim and Yang Hongseok were in talks to star in the series. Following news reported the script reading held in Seoul on April 5, 2021, Hongseok and Yeri confirmed to be acting as the protagonist of the series. On May 14, rookie actor Lee Sangjun confirmed joining the cast and followed by Kim Gyeolyu on May 25.

A teaser video was released on June 10 on the occasion of Ha Rin's birthday. The production team explained, "This video contains the meaning of 'Blue Birthday', the first love who chose death on the day of her birthday. Through the videos and images that will be released, the inner story will be revealed little by little." 'Blue Birthday' will be released on Naver TV on July 23rd, and on YouTube from August 6th.

Official Poster; “The day that I meet you from 10 years ago once again.”

"On my 18th birthday, my first love left this world." 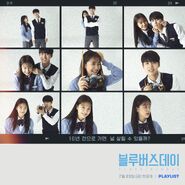 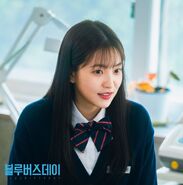 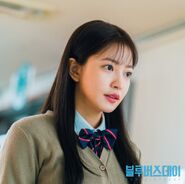 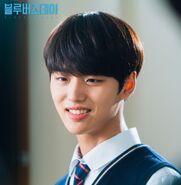 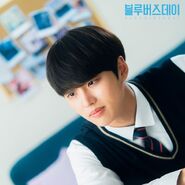 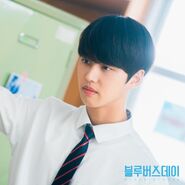