Phunsawat was born on October 4, 1993 in Bangkok, Thailand.

Phunsawat studied Business Administration at the University of Bangkok before starting to study Political Science at Ramkhamhaeng University.[1]

At a young age, Atthaphan entered the entertainment industry supported by his mother, who knew about her son's ambitions: 'Mommy, Gun wants to be on TV', he reminisced in an interview. With her support, he auditioned for film companies and became the first winner of The Boy Model Competition 2003.

He made his film debut in 2003 with a small role in the series Benja Keta Kwarm Ruk. He pursued further roles at a very young age with works like Gomin (2004) and his first film Pirate of the Lost Sea (2008).

However, it was only in 2009 that he rose to popularity after playing the young Nut in the thriller film Cheun. He got nominated for "Best Supporting Actor" at the Suphannahong National Film Awards for his performance as Nut.

In 2015, he was nominated for "Best Actor" at the Suphannahong National Film Awards for his performance in The Blue Hour. In the movie, he portrays Tam, a homosexual boy, alongside Oab Oabnithi Wiwattanawarang. The same year, he played Gump in Love Love You, the sequel to Love's Coming. In the first installment, said character was portrayed by Mild Suttinut Uengtrakul.

In 2018, he won the "Rising Star of the Year" award at Daradaily: The Great Awards for his portrayal of Rome in Senior Secret Love: Puppy Honey.

In 2020, he was awarded the "Best Actor in a Supporting Role" award at the Asian Television Awards and Best Fight Scene at the LINE TV Awards (2019) for his portrayal of Punn in The Gifted.

Outside his acting career, Gun owns the clothing brand GENTE and co-owns another clothing brand Too Cute To Be Cool with actresses Alice Tsoi and Nichaphat Chatchaipholrat (Pearwah). 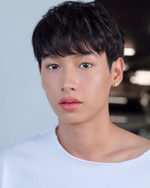