I'm Tee, Me Too (คนละทีเดียวกัน; Khon la thi diao kan) is a 2020 Thai television series starring Gun Atthaphan Phunsawat, Krist Perawat Sangpotirat, Singto Prachaya Ruangroj, Tay Tawan Vihokratana, Off Jumpol Adulkittiporn, and New Thitipoom Techaapaikhun. The series follows an orphaned young man who rents out his house to five others who share the same nickname as his but have starkly different personalities.

Directed by X Nuttapong Mongkolsawas and produced by GMMTV, the series is one of the two television series launched by GMMTV together with AIS Play last July 8, 2020. It will premiere on GMM 25 and AIS Play on September 18, 2020, airing on Fridays at 21:30 ICT.

After losing his beloved mother, Watee or "Tee" becomes a lonely man. He has no father, siblings, nor even close relatives. The only thing left is a house. It's a home full of happy memories. The Door, the window, the sofa, every square inch of the house is like a diary, recording all the happiest moments of his twenty years.

Tee spends almost a month alone in the house before learning the truth: the house has an outstanding six mortgage instalments, almost forty thousand baht per instalment. In order to pay it, Tee resolves to turn the mostly empty home into a rental. Although he's distrustful of others and though he dislikes the idea of living with strangers, given his financial problems, he grudgingly settles for sleeping on the sofa in the living room and concedes the bedrooms to five strangers.

His home attracts five students from the same university, each with the same name: Tee. Although all six Tees have the same names, their habits and behaviours are anything but. Watee just has to endure it for six months until the mortgage is paid; then he can get rid of them.

How will their presence affect Watee? Will he be able to pay off the mortgage and get the peace as he desires? Or will something happen to change the behaviours of all six residents?[1]

An architecture student who owns a house near the university. Watee lives alone in his house since his mom's death, and is reserved and overly suspicious of everything. When he learns that the bank will take the house due to his late mother's unpaid mortgages, he resolves to rent out its rooms. Soon, he ends up having five boarders who are all nicknamed "Tee."

A food science student who is the eldest of the five boarders in Watee's house. Maitee loves to cook and is very by the book. He has a strange phobia — being scared of good news.

A communication arts student who is one of the five boarders in Watee's house. Maetee is an imaginative and overly delusional scriptwriter who is extremely scared of ghosts.

A music student who is one of the five boarders in Watee's house. Teedo is overly sensitive to the sound of chewing. He cannot bear listening to even the relatively quieter chewing noises that he has to put headphones on during meals.

A forestry student who is one of the five boarders in Watee's house. Foul-mouthed and straightforward, Teedet busies himself with exercising and taking care of the plants in and around the house. He is very scared of beautiful women that he faints if he sees one.

Tee-Do's new love interest after breaking up with Ink.

The girl introduced by T-Rex and Maetee in a bid to cure Teedet's fear of beautiful women. 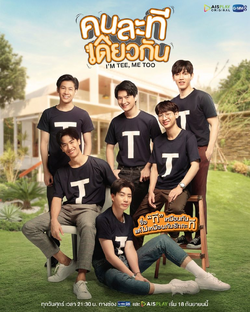