It's Okay to Not Be Okay

It's Okay to Not Be Okay

It's Okay to Not Be Okay (사이코지만 괜찮아; Saikojiman gwaenchana; lit. Psycho But It's Okay) is a 2020 South Korean romantic television series starring Kim Soo Hyun and Seo Ye Ji. The series tells an unusual romance story between two people who end up healing each other's emotional and psychological wounds. It aired on tvN every Saturday and Sunday at 21:00 KST time slot from June 20 to August 9, 2020 for 16 episodes. The series is available worldwide on Netflix.

Moon Gang Tae (Kim Soo Hyun), is a caretaker working at a psychiatric ward who does not even bother to believe in love. He seems to be carrying all the weight and pain in life, and devotes himself only to looking after his disabled older brother.

Go Moon Young (Seo Ye Ji), is a children's book writer who is clueless about love. She is popular among all age groups, yet very antisocial and indifferent to others.[2]

An orphaned caregiver working at OK Psychiatric Hospital. While empathetic to everyone around him, he struggles to give himself love as a result of his past experiences in life and avoids having close relationships with anyone other than his older brother. Because of his brother's traumatic experience, he frequently moves from town to town with him and has never lived a normal life.

A popular children's book author with antisocial personality disorder. She had a troubled childhood and a turbulent relationship with her parents. She develops a romantic obsession over Moon Gang Tae after a coincidental encounter and often goes to extreme lengths to get his attention.

Moon Gang Tae's older brother who is on the spectrum. He is a fan of Go Moon Young, as well as an aspiring illustrator. He was the sole witness of his mother's murder, resulting in his irrational fear of butterflies. This fear develops into nightmares every spring which forces Gang Tae to move towns with Sang Tae in order to "run away from the butterflies".

A nurse and Moon Gang Tae's co-worker at OK Psychiatric Hospital. She has an unrequited crush on Moon Gang Tae, and is shown to be shy and easily jealous of others who are close with her romantic interests. She dislikes Go Moon Young, with whom she had a brief friendship in elementary school. Ju Ri lives with her mother Kang Soon Deok, a cook at the hospital.

Main Article: It's Okay to Not Be Okay OST

Starting from July 4, 2020, each episode was aired in two parts.

The first script reading was held on May 8, 2020, and filming was completed on July 31, 2020 without a wrapping party out of concerns for the COVID-19 pandemic.

Filming locations for the drama included Cafe Sandina in Wonju, Gangwon, which provided the background for the "cursed castle", completed with CGI effects; Secret Blue Cafe in Goseong County, Gangwon which was transformed into OK Psychiatric Hospital for the shooting using props. Outside locations included streets and beaches in Goseong, as well as locations in Yangju (Gyeonggi) and Incheon.

The five storybooks created by screenwriter Jo Yong for the series, and illustrated by concept artist Jamsan, were published (in Korean only) by Wisdom House in July and August 2020. Though The Boy Who Fed on Nightmares was published after Zombie Kid, it is listed by the publisher as the first book of the series.

The series' script, also illustrated by Jamsan, was published in two books: each covers eight episodes.

It's Okay to Not Be Okay drew an average viewership rating of 5.4% and soon became a Hallyu K-Drama following overseas popularity. It topped the Content Power Index (CPI) and also ranked first on Good Data ranking during its entire run. With four episodes released it ranked in the top 10 most talked about programs according to the results of a survey on internet reactions conducted by the government agency Korea Communications Commission for TV programs of the first half of 2020; while as a result of an analysis by Smart Media Rep on online platforms such as Naver and YouTube, the average number of playbacks per episode was found to be 3.37 million with a majority share of viewers from the 20s.

Following the popularity of drama the outfits wore by Seo Ye Ji also caught attention for its uniqueness making Korean fashion designers and brands of earrings, handbag and nightwears famous internationally. The children's storybooks that appeared in the drama were listed in the top 20 bestselling books of the month, according to the Kyobo Bookstore and YES 24 websites.

It's Okay to Not Be Okay was recognized for its visual storytelling, unique characters and was praised for the acting by the cast.

The Manila Bulletin wrote that "While clichés are necessary in romantic K-dramas, IOTNBO was unafraid to introduce fresh elements and twists." The Cosmopolitan Phillipines reviewed it saying "It's unlike any drama we've seen before... close to perfection, but just like all of us, still a work in progress." The Straits Times gave the drama a rating of 3.5/5 stars, while South China Morning Post gave a rating of 3/5 stars pointing out that "The few detective fiction fans expecting to learn the morbid details of what exactly happened should brace for disappointment."

Representation of Mental Health and Response

Although the series is a romance drama and a work of fiction, it was praised for its depiction and representation of mental health and abuse. At the same time, some details, such as female lead's Antisocial Personality Disorder, have been questioned. The Hindu reported that, "The initial buzz around the show came largely from its premise and the fact that it would shed light on mental health."

The SCMP in its review said that, "What's immediately interesting about the series is how it shines a light on mental health and depression... It's Okay to Not Be Okay highlights the fact that everyone has problems in life and how people deal with their issues," The Prothom Alo praised the series writing that, "In a world where people with autism are known as weak or helpless, this drama shows a point of view that they are kind human beings too... This drama makes people realise, societies should stop looking at those who seem different. Especially, those with special needs."

An act of kindness by actor Oh Jung Se was a hot topic on social media after he spent a day with a fan, cellist Bae Boum Jun who was also an autist as his character in the drama, at an amusement park.

The series was criticized on social media leading to the KCSC receiving over 50 formal complaints. One was a sexual inappropriate scene where female lead Moon Young overtly stares and touches male lead Gang Tae's body as he gets dressed. In another scene a male character, who suffers from manic depression and exhibitionism, reveals parts of his bare body, with his genitals covered by a drawing of an elephant. However, many viewers defended both the actions of the character and the production team by arguing that the scenes were to express character's personality.

As a result, on August 26, 2020, the broadcast censorship body issued a legal sanction to the television series for sexually inappropriate scenes in Episode 3 regarding it against the broadcast deliberation regulations, including Article 27 on duties of integrity and Article 30 on gender equality. The reason explained by the subcommission was that, "Even considering the fact that they were meant to exaggeratedly express a character's personality, (the scenes in question) show how insensitive the drama's producers are to gender equality in broadcasting content that may belittle a certain gender and hold the possibility to justify sexual harassment and molestation." 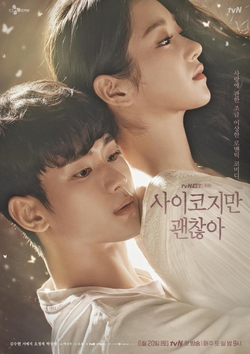