Perawat Sangpotirat (พีรวัส แสงโพธิรัตน์; born 18 October 1995 in Bangkok, Thailand), better known as Krist (คริส), is a Thai actor, singer and model. He is known for his role as Arthit in the 2016 Thai Boys' Love series Sotus: The Series.

Perawat was born on 18 October 1995 Bangkok, Thailand. He graduated from Satriwitthaya 2 School and from the Faculty of Economics at Kasetsart University.

Perawat made his acting debut in 2016 with the Thai BL series Sotus: The Series where he played the lead role of Arthit alongside Singto Prachaya Ruangroj and gained widespread fame in Thailand and parts of Asia.

In 2017, he played the lead role of Mek alongside Jane Ramida Jiranorraphat in Teenage Mom: The Series which was based on a Thai webtoon named Teen Mom. In 2017, he also starred in Senior Secret Love: Puppy Honey 2 in a supporting role.

In 2018, he once again portrayed the lead role of Arthit in the sequel of SOTUS: The Series, Sotus S: The Series.

On June 11, 2018, he released his debut single "The door, weather and a good day", which would later be used in the soundtrack of the TV show Mint To Be.

Later in 2018, he played the title character Mint in the GMM25 drama Mint To Be alongside Mook Worranit Thawornwong which was based on the novel of the same name and was simultaneously telecasted on Chinese video streaming website Tencent Video which garnered massive views in a short amount of time, partly due to his large Chinese fan following. It became one of the hottest Thai dramas in China.

On March 4, 2019, he released his second single "SKY" which he co-produced and wrote the lyrics for the rap section. 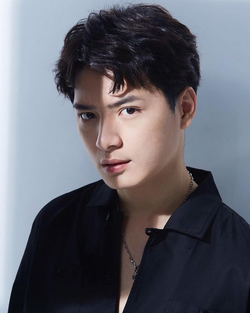