Manner of Death is a 2020/2021 drama about a forensic expert who determines that a supposed suicide was probably a murder.

A forensic expert, Dr. Bhanjit, examines the remains of a woman whom it was assumed had committed suicide. However, further examination reveals disturbing signs of a possible murder. A stranger visits the doctor and warns of repercussions if the Dr. decides to pursue the case any further. The good doctor ignores this warning– even though the stranger had been explicit with his message. His prosecutor friend disappears when told of the incident. When the Dr. decides to investigate, a prime suspect– a young man named Tan– adamantly rejects the doctor's findings and offers to volunteer to help.[1] 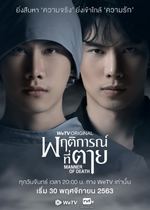