Miracle in Cell No.7

Miracle in Cell No.7

Miracle in Cell No. 7 (7번방의 선물; 7番房의 膳物; 7beonbangui Seonmul; lit. A Gift from Room 7) is a 2013 South Korean film starring Ryu Seung Ryong, Kal So Won and Park Shin Hye. The film is about a mentally challenged man wrongfully imprisoned for murder, who builds friendships with the hardened criminals in his cell, who in return help him see his daughter again by smuggling her into the prison. It is based on the real-life story of a man who was tortured and pleaded guilty under duress to the rape and murder of a 9-year-old girl on September 27, 1982 in Chuncheon before being finally exonerated in November 2008.

Lee Yong Gu is a mentally impaired father with the intellect of a six-year-old, who lives in a run-down house along with his daughter of the same age, Ye Seung. One day, he gets into a physical altercation with the police commissioner who has just purchased the last Sailor Moon backpack for his daughter, a gift Yong Gu was saving up to buy for Ye Seung. Soon after, the police commissioner's daughter dies in a freak accident while she is taking Yong Gu to another store that sells the same backpack. When he tries to resuscitate her, a woman witnesses him and mistakes him to be molesting her. Yong Gu is falsely accused of the abduction, murder, and rape of a minor. The police quickly take advantage of his disability and force him to admit to committing the crimes, while ignoring exonerating evidence. Yong Gu is imprisoned and assigned to Cell No. 7, the harshest cell in a maximum security prison.[1]

The film took 4.6 million admissions (the equivalent of more than US$30 million) in its first two weeks due to strong word of mouth. Despite the release of The Berlin File, it drew in 15% more audience members on its third week, with seat booking at 75.8%. 32 days after its release, it became only the eighth film in Korean cinema history to break the 10 million mark in ticket sales. This was especially notable since Miracle in Cell No. 7 had no big stars, and a modest budget with a break-even point of 1.7 million admissions, making its eventual profit the highest among the films that reached 10 million.

Analysts say among the reasons for its success was the long lunar new year holiday and families going to see the film in groups. The film proved to be especially popular among middle-aged and elderly Koreans.

The movie grossed US$80.3 million in total.

The film was adapted into a Kannada movie in 2017 titled Pushpaka Vimana. Kross Pictures to produce the official Hindi remake of the movie in collaboration with Indian Film Studios and was directed by Umesh Shukla.

It was also adapted in 2019 in Turkey as 7. Koğuştaki Mucize starring Aras Bulut İynemli in the lead role. This is an entirely dramatic interpretation and adds several story elements and characters.

The film was also adapted in the Philippines with the same title, starring Aga Muhlach, Bela Padilla, and Xia Vigor. 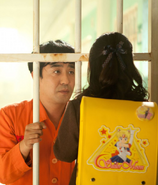 Miracle in Cell No.7 - Official Trailer