My Gear And Your Gown

My Gear And Your Gown

Directed by New Siwaj Sawatmaneekul, who also directed Love By Chance and Until We Meet Again: The Series, and produced by GMMTV together with Studio Wabi Sabi, the series is one of the three television series launched by WeTV together with GMMTV, Studio Wabi Sabi and TV Thunder last June 23, 2020. It premiered on WeTV on September 14, 2020, airing on Mondays at 18:00 ICT.

Dr. Pai (Win Pawin Kulkarunyawich) is a medical student who previously led the school's academic club. With glasses on while growing up, he didn't have that confidence with his look and has never believed in love. Meanwhile, Itt (Marc Pahun Jiyacharoen) is an engineering student and previously led the school's sports club. With his dominating presence, fate brings him back to his enemy who wears a dust grey medical gown earring.

Main Article: My Gear And Your Gown OST 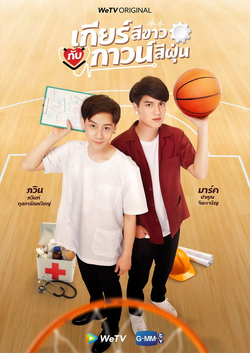 My Gear And Your Gown - Official Trailer