His breakout roles came in 2015 with the dramas Kill Me, Heal Me and She Was Pretty. The same year, Park featured in thriller film The Chronicles of Evil.

Park found success in the 2017 youth romance drama, Fight for My Way alongside Kim Ji Won. The television series was a major hit in South Korea and topped ratings in its time slot. The same year, he played his first big-screen leading role in action comedy Midnight Runners with Kang Ha Neul. Park won the Best New Actor award at major film award ceremonies such as the Grand Bell Awards and Korean Association of Film Critics Awards.

In June 2018, his contract with Content Y expired and he signed with Awesome ENT a month later. Awesome ENT was established by his longtime manager.

In tvN's 2018 romantic comedy drama What's Wrong with Secretary Kim, Park starred alongside Park Min Young. The series was a hit and Park received positive reviews by critics for his performance, being dubbed the "master of romantic comedy" by Korean press.

More recently, Park starred in the occult film The Divine Fury (2019). The same year Park served as the special juror for the Asiana International Short Film Festival. He also made a guest appearance in the Oscar-winning movie Parasite (2019).

In 2020, Park starred in JTBC's drama Itaewon Class as a restaurant owner, based on the webtoon of the same name. The drama was a success, and was praised for its interesting story development and colorful performances. He is also set to star in the sports film Dream as a soccer player turned coach named Yoon Hong-Dae, directed by Lee Byeong Heon.

He was signed under Content Y, until June 2018, when his contract expired. 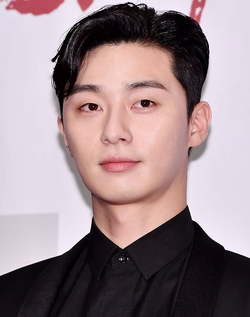