Drama Wiki
Register
Don't have an account?
Sign In
Advertisement
in: TDrama, TDrama2019, GMM One,
and 5 more

TharnType: If You Hate Me That Much
I Should Make You Become My Lover

"ขอแค่เธอ" ("Hold Me Tight") by Off Chainon

TharnType: The Series is 2019 Thai BL television series starring Gulf Kanawut Traipipattanapong and Mew Suppasit Jongcheveevat. It is an adaptation of popular web novel TharnType Story เกลียดนักมาเป็นที่รักกันซะดีๆ (lit. TharnType's Story: Hate You, Love You More) by MAME (Orawan Vichayawannakul). The story tells about prejudiced university boy and a homosexual room mate who are always on constant tension but gradually open up to each other, developing their hate into affection. The series, directed by Tee Bundit Sintanaparadee and produced by Me Mind Y[note 1], premiered in Thailand and aired on One 31 from October 7, 2019 to January 6, 2020 with repeats on LINE TV. A special episode titled TharnType Special, Our Final Love was screened on January 19, 2020 at Siam Pavalai Royal Grand Theatre.

Type is a dark, tall and handsome freshman. Although he’s a warm boy, he is homophobic because he was molested by a man as a child. His life turns up side down when the new year of college brings along a very interesting person in his life, a gay roommate, Tharn. Tharn is a very handsome music major with fair skin and mixed features. He is also openly gay. With a gay guy and a guy who hates gay men that have to share a small space together for the rest of the year — what can possibly be the outcome of their story? Hatred? Or maybe love?[1]

The novel TharnType Story เกลียดนักมาเป็นที่รักกันซะดีๆ was first released online on December 2, 2014 via Dek-D.com's platform for writers. Even though the story is a spinoff of MAME's previous novel Love By_Chance, the events of TharnType take place three years prior. The novel was published as a physical copy in 2016, compiling 62 chapters into two books. A sequel consisting of 22 chapters about Tharn and Type's life as a couple in their seventh year together was published as one physical book. As of 2020, TharnType Story has 2165 ratings on its Dek-D official page with over 3.8 million total views. 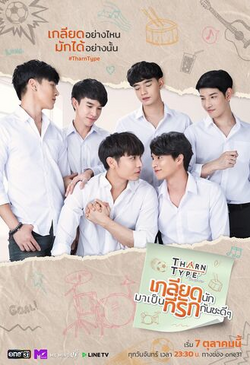 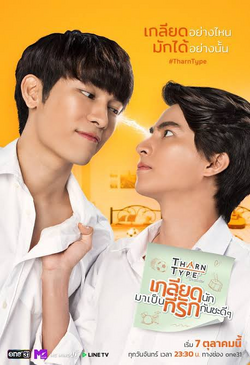