What's Wrong with Secretary Kim (김비서가 왜 그럴까; Kimbiseoga wae geureolkka) is a 2018 South Korean television series starring Park Seo Joon and Park Min Young. It is based on the novel of the same title by Jung Kyung Yoon which was first published in 2013, which was then serialized into a webtoon comic by KakaoPage in 2015. The series aired on tvN from June 6 to July 26, 2018, on Wednesdays and Thursdays for 16 episodes.

Can you be so self-absorbed that you have no idea what's truly going on around you?

Lee Yeong Joon (Park Seo Joon) is vice president of his family-owned company, Yoomyung Group. He is so narcissistic that he doesn't pay attention to what his trusty secretary, Kim Mi So (Park Min Young), is trying to tell him most of the time. After nine years of making Yeong Joon look good and stroking his very large ego, Min So decides to quit her job. Yeong Joon's older brother, Lee Sung Yeon (Lee Tae Hwan), is a famous author who is in love with Mi So.

Can Yeong Joon accept the fact that Mi So no longer wants to work for him or will he get the wrong idea?[1]

Vice chairman of Yumyeong Group. He is handsome and capable, but his narcissism makes it difficult for Mi So to work with him. He realized his feelings towards Mi So after realizing that he might lose her. He can be jealous if Mi So is with his brother or with someone other than him. At one point in his life, he suffered PTSD.

A highly skilled secretary who has worked with Yeong Joon for nine years. She soon reciprocates Yeong Joon's feelings after realizing that he was a part of her childhood.

Yeong Joon's older brother and a famous author. He has a crush on Mi So.

The rookie secretary to the Vice chairman, being groomed to replace Mi So who has announced her resignation.

President and Director of Yumyeong Group. Yeong Joon's best friend back from university. He is Yeong Joon's confidante and provides him with much advice drawn from personal experience. He is still in love with his ex-wife.

Deputy of Yumyeong Group. He is known for his handsome looks, elite education, being a workaholic, and extreme frugality.

A section head, who initially coveted the open position of secretary to the vice chairman, and had a crush on Gwi Nam.

This drama aired on a cable channel/pay TV which normally has a relatively smaller audience compared to free-to-air TV/public broadcasters (KBS, SBS, MBC and EBS).

Much of the visual styling of the series protagonists have referenced the comic version's cues, including clothing designs and reenacting the comic cover for the drama's promotional stills and images.

The first script reading was held on April 10, 2018, at Studio Dragon in Sangam-dong, Seoul, South Korea.

Actors Park Seo Joon, Pyo Ye Jin, and Hwang Bo Ra previously worked together in Fight For My Way. Lee Min Ki, Jung So Min, and Jung Yoo Mi made a cameo appearance in the drama.[3]

The press conference for the drama was held on May 30, 2018, at the Times Square in Seoul with the attendance of the main cast and crew. 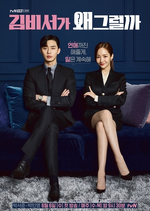 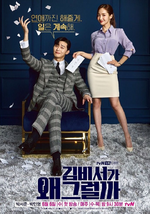 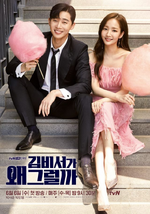 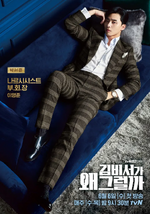 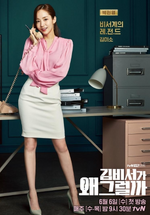 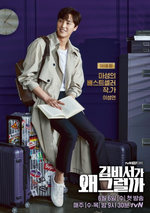 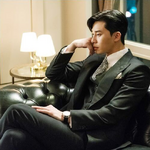 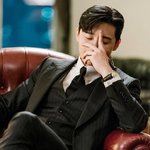 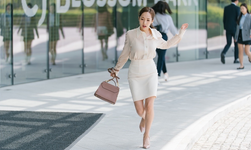 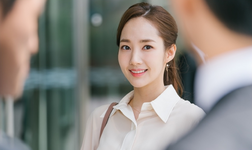